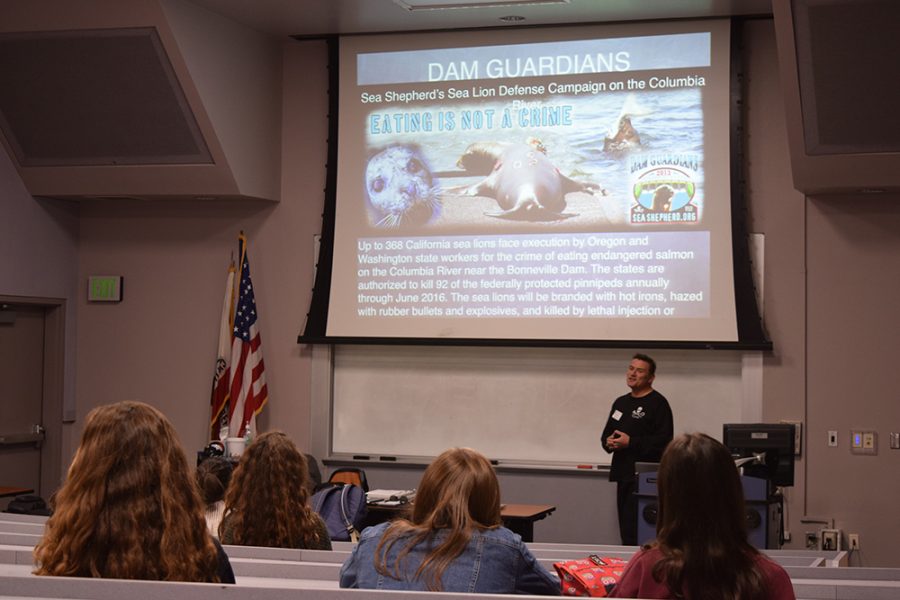 Kevin Yzaguire, member of Sea Shepard, gave a presentation to students in G9, Jan 25. Yzaguire's goal was to raise awareness about Ocean Conservation and ways to solve the problems in oceans today (Nick Burt/Talon).

Sea Shepherd is a non-profit marine conservation society that protects a variety of marine life and is based in Friday Harbor in San Juan, Washington.

Sophomore Skylar Hartmire said watching the presentation piqued her interest in Sea Shepherd and what they do.

“I thought the turnout for the presentation was significantly better than the last couple of years I’ve attended,” Combs wrote in an email.

Sea Shepherd has sent speakers to the high school as long as SPAE has been a club. In the past, the organization has sent one speaker — this year, it sent two.

“I think it was overall a successful and eye-opening presentation that hopefully inspired the students,” Combs wrote.

Sea Shepherd currently has nine vessels, and their operations have included shining laser lights in whalers’ eyes, and boarding and sabotaging whaling vessels.

According to members of Sea Shepherd, these controversial and direct actions are necessary because the international community is unwilling to take action to stop species-endangering practices of whaling and illegal fishing.

Sea Shepherd is one of very few organizations willing to go to such lengths to prevent illegal marine practices. They operate several different campaigns each year surrounding different areas of conservation around the world.

Sea Shepherd has received support from several media and celebrity groups. However, their tactics have been opposed even by governments that denounce whaling, such as Australia and New Zealand.  The Japanese government has even called the members of Sea Shepherd eco-terrorists.  Nonetheless, in March 2014 the International Court of Justice ruled that Japanese whaling in the Southern Ocean was not, as previously claimed — for scientific purposes — and ordered Japan to discontinue operations.

Feature Interview: Kevin Yzaguire
What’s the message to the high schoolers you wanted to convey by coming here?

Ocean conservation. We have to protect our oceans. Well, we have to protect all our environment, but the oceans especially, because we get too much oxygen. We get 80% of our oxygen from the ocean. If the oceans die, we die. We cannot live on this planet with a dead ocean. And there’s so much biodiversity out there in the ocean, we have to protect it. Our fish docks are being depleted; they’re like 80-85% exploited and overexploited right now. There has to be change to reverse that. So I would say, the message is to, we have to start thinking of long-term future.

Would you say that ocean conservation is your goal as an organization?

Oh, definitely. Marine mammal protection mostly. But with marine mammal protection comes everything else. I mean, all our boats are vegan. We don’t use animal products. A good majority of our organization is vegan. I’m vegetarian, not completely vegan. I’m like 90% vegan, but I don’t get split hairs over egg noodles I guess. We try to do that vegan thing, because what happens on land affects the oceans too. So when you’re talking about these cattle farms that pollute the groundwater that goes into streams that goes into the oceans, everything’s so connected. That’s our message; everything’s connected. Well, that’s my message.

So the way to achieve this goal is to do fundraising, help the people out there on these operations?

Okay, so in Taiji, that’s a ground base campaign. We actually have volunteers there the whole season. They just go out there, and all they can do is livestream. They document, they take pictures, they do counts, they just raise a lot of money for that. Before they made the movie “The Cove,” nobody really knew about this. And a lot of people still don’t know about this. So it’s like every person we reach, then they tell two people, then they tell two people, two people, and so on.

Can you tell me what you do?

We provide funding for those that do go. There’s thousands upon thousands of people that can go out there. You see, there’s college people that just got out of college, and they’re like “I’m not doing anything for a year or the next six months,” so they go on our campaigns. So the crews change out a lot, but some of them stay with them for a long time. They can actually become captains themselves.

We had “Whale Wars,” that started it off. We also have a bunch of movies, like “Pirate for the Sea,” “Why Just One,” “Confessions of an Eco-Terrorist.” They call us eco-terrorists. I say, “why not?” Anyway so “Whale Wars” is not going on now, so now there’s a new show called “Ocean Warriors,” and that documents two of our campaigns: the one in the Gulf of California, and the one for the icefish.

Is there anything else I should know about Sea Shepherd?

Our mission is to protect our ocean. We gotta get the plastics out of the ocean, support the biodiversity. And that all comes down to, in my personal view, is cutting down on our consumption of animals. If we increase more plant-based diets, we can help our environment. I mean, that’s the simple truth. And why agriculture is the biggest problem, environmentally. More than cars, way more than cars.