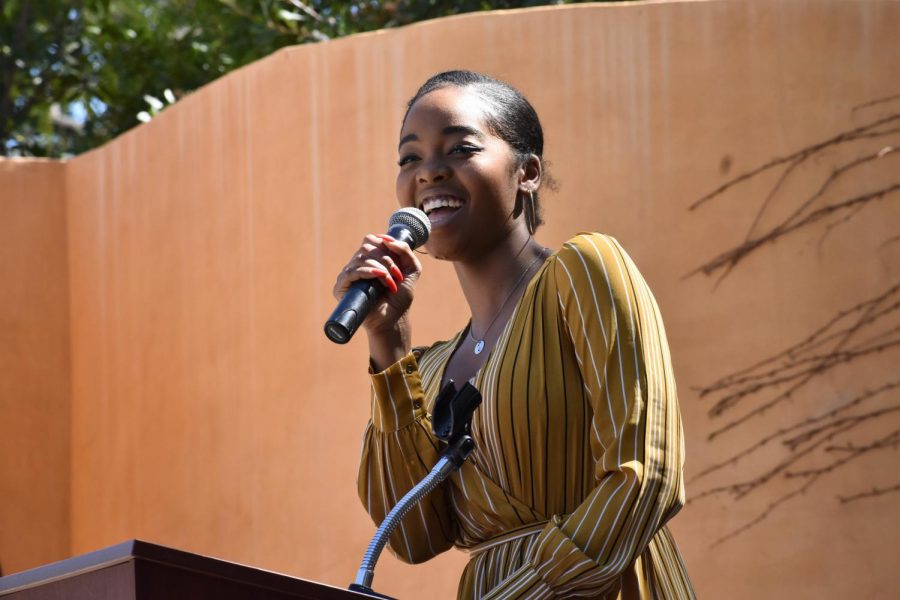 Above, guest speaker Kaija Hinds leads her career as a Video Editor and Producer of the show "Gimme Mo" and an Associate Board Member of the Thirst Project.

The Ventura County Girl Up Coalition came together March 17 to host the second annual Hats and High Tea event at the Los Robles Gardens in Thousand Oaks. The event brought women together for International Women’s Day whose aim, in sharing their experiences, was to inspire girls of all ages.

“We really try to have a lot of discussions, not just about gender inequality, but sometimes about the secondary effects of gender equality,” Rai said.

Rai founded the Girl Up club at her high school two years ago as a sophomore and her involvement in the club only increased with her role as a teen advisor at her school.

“Hats and High Tea is an event that gives the community an opportunity to discuss issues regarding women both abroad and at home,” senior and Co-President of the Oak Park High School Girl Up club Kimia Ranjbar wrote to the Talon.

Guest speakers were invited to share their stories and the challenges they overcame to get where they are today. Oak Park contacted Kimia Mohebi, an OPHS graduate and delegate for the United Nations, to talk about her political involvement as a young woman while attending Moorpark College.

Additionally, Co-Founder, President and CEO of SimpliPhi Power Catherine Von Burg was invited as a guest speaker. Her clean energy company stretches over 43 countries globally and is 47 percent female.

“We probably have the most diverse workforce out of all the clean tech companies across the U.S.,” Von Burg said in her speech.

Von Burg spoke about her commitment to transform the power grid and create universal access to clean energy.

The Hats and High Tea event was orchestrated over the course of eight weeks.

“Without Kavita’s leadership in the process, I don’t think the other clubs would have been able to put the event together,” Ranjbar wrote to the Talon.

Girl Up’s headquarters are located in Washington D.C. The organization picks 23 global teen advisors, that become Girl Up leaders, their responsibilities as leaders are to help brand their organization, push their initiatives, and rest assure them that the girls are the changemakers in a movement for equality. Rai was selected as a Girl Up Youth Advisor this year.

Rai says that she gets her inspiration from other clubs around the world through social media posts.

“Gender inequality looks different here, in Ventura County, than it does in North Carolina, or even in Mexico. Mexico’s club actually won Girl Up club of the year last year at the D.C. conference we had, ” Rai said.

Girl Up was founded as a United Nations Foundations organization in 2010. It focuses on building female empowerment in countries like Guatemala, Malawi, Uganda, Liberia and India.

“Girl Up is dedicated to securing equal privileges for underprivileged adolescent girls in developing countries,” Ranjbar wrote to the Talon.

In Dec. 2018, Girl Up clubs worldwide had collectively raised money for girls’ access to bicycles to get to school in Uganda, Malawi and Guatemala.

“The main reason I got involved in this organization was learning about really strong girl-overcoming barriers that prohibited them from being free and doing what they loved,” Ranjbar wrote to the Talon. “Our club fundraises for the campaign, helps advocate laws that affect international aid through calling our congress members and strives to educate our community of our cause.”