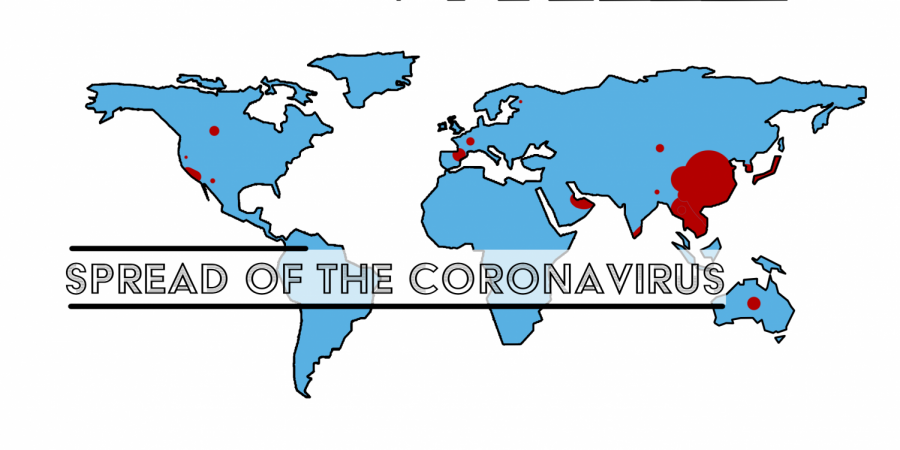 The Coronavirus epidemic was first seen on December 31, 2019 and as of now still spreading.

Dec. 31, 2019 — Wuhan saw the first case of the coronavirus and became the epicenter of a deadly epidemic.

From one city, the virus has spread to France, India, Japan, Nepal, Cambodia, Singapore, Vietnam, Taiwan, Canada, the United States and more, according to the Washington Post.

This spread can be credited to people traveling by planes, cruise ships, etc. and inadvertently infecting those around them via touch, coughs and/or sneezes.

According to Livescience.com, the coronavirus was originally a virus which infected bats, but has recently mutated to affect humans as well. Because this is a recent mutation, there are currently no vaccines or antibiotics for the coronavirus.

According to the New York Times, the U.S. government arranged three flights for Americans who were in Wuhan, China to be evacuated the week of Feb. 3. The flights transported hundreds of Americans to California where they were placed in quarantine at the Travis Air Force Base and on Marine Corps Air Station Miramar.

Other states are hosting quarantine centers as well such as the Lackland Air Force Base in Texas and the 168th Regiment Regional Training Institute in Colorado. Quarantining is a rare power used by the US government, which Trump has invoked as a global health emergency has been declared.

As the number of infections rises to 28,000, the death toll climbs to 565. However, while the numbers continue to rise, the virus itself only has a 2 percent mortality rate. In China, 60 million people are currently under lockdown in their respective homes. Cruise ships are under scrutiny as two docked in Japan and Hong Kong had infected people on board.

Currently, there are 12 known cases of the coronavirus in the U.S. — six in California. Counties with infected individuals in California include San Benito County, Santa Clara County, LA County and Orange County. Local institutions have taken precautionary measures.

According to ParentSquare, the Ventura County Public Health, the Centers for Disease Control and the Ventura County Office of Education have been in contact with the Oak Park School District and dictated that anyone returning from Hubei, China since Feb. 3 will be placed under mandatory quarantine for two weeks and monitored by public health officials.

“Oak Park USD will continue to communicate with the Ventura County Office of Education and Ventura County Public Health (VCPH) – Communicable Disease Office to monitor any changes regarding this virus,” Director of Student Support and School Safety Stewart McGugan wrote on ParentSquare. “Please know that the District is committed to maintaining the privacy of our students. Our schools will work with students and families under self-quarantine with sensitivity and confidentiality.”

District nurse JoAnn Housman recommends that students take certain precautionary measures such as one would take for the regular flu: hand washing, cover[ing] coughs and sneezes and not coming to school when sick.

In addition to the suggested by Housman, the World Health Organization also suggests maintaining three feet of distance with people at all times, especially anyone exhibiting flu systems, as well as avoiding touching the eyes, nose and mouth, seeking medical care for cold and flu symptoms early. Other tips are to take precautionary measures at animal markets, wet markets or animal product markets, avoiding eating raw and/or undercooked foods and staying healthy while traveling.

Following the outbreak of the coronavirus, many news stations have reported on racism against the Asian community. McGugan believes that students at OPUSD would not participate in that growing trend.

“Some groups might be stigmatized more than others because of the birth/location of the virus. However, your race and ethnic background do not matter. People who have traveled to China, who are [of] a different race or ethnic background, are just as likely to contract the virus as any other race,” McGugan said. “I do not believe OPUSD students would do this sort of thing because of the great culture of our schools and the good work that all of our parents and staff do to combat this type of behavior. However, if it did occur, then we would handle each of those cases individually.”

Regarding the chance that a student in the area might be affected, McGugan says the probability is low.

“I do not know the exact percentages, but I do know that the probability is very low compared to mainland China. We will continue to monitor all of our students and work with the families who have recently traveled to China,” McGugan said. “We are working with the Ventura County Public Health and the Ventura County Office of Education on how to properly handle and inform students and parents.”

The coronavirus is currently only considered an epidemic. By definition, an epidemic means that there is a current increase or spike in a certain disease in a particular time, and/or place. Outbreaks are very similar to epidemics by definition, the key difference being that an outbreak would refer to a spike in a specific geographic location, while epidemic has a broader location and faster spread of the infection. A pandemic refers to a disease which has spread over many countries and/or continents and has affected a large population as a result. According to the LA Times, the likelihood of the coronavirus being declared a pandemic is increasing.

In response to this epidemic, various organizations have donated money to help including the Bill & Melinda Gates Foundation, who donated $100 million. WHO is asking the international community for donations to get $675 million to help for a new response plan to be implemented in the upcoming months.

“My biggest worry is that there are countries today who do not have the systems in place to detect people who have contracted with the virus, even if it were to emerge,” Dr. Tedros Adhanom Ghebreyesus, WHO Director-General said. “Urgent support is needed to bolster weak health systems to detect, diagnose and care for people with the virus, to prevent further human to human transmission and protect health workers.”

The Strategic Preparedness and Response Plan from WHO explains they hope to “limit human-to-human transmission of the virus, particularly in countries most vulnerable if they were to face an outbreak; identify, isolate and care for patients early; communicate critical risk and event information; minimize social and economic impact; reduce virus spread from animal sources; and address crucial unknowns.”
In a press release from WHO, Director general Dr. Tedros Adhanom Ghebreyesus emphasized a congratulatory response to China and their response to the epidemic.

“As I said it earlier, we should have actually expressed our respect and gratitude to China for what it’s doing. It has already done incredible things to limit the transmission of the virus to other countries,” Ghebreyesus said in a press release from the WHO. “And where respect is due, then you don’t punish. Meaning if anyone is thinking about taking measures, it’s going to be wrong. And WHO doesn’t recommend, and currently opposes, any restrictions for travel and trade or other measures against China.”

While WHO and other organizations have advised plenty of caution, they have also worked to expose myths that the public shouldn’t fall for. For example, people don’t need to avoid any packages coming from China as the virus cannot survive long on objects. While there is no current evidence suggesting that pets can transmit the disease, WHO still cautions pet owners to wash their hands after playing with pets in an effort to reduce the possibilities of E. Coli or Salmonella.

WHO also warns the public that vaccines against pneumonia will not protect you from the coronavirus.

While the Coronavirus is currently the subject of many news headlines, the reality is, much like the regular flu, basic cautionary measures can serve as protection from the virus. And like the flu, while there are people dying from it, the mortality rate is low. According to the CDC, 10,000 people died from the flu in the 2019-20 season in the US with a 7.1 percent mortality rate from a combination of pneumonia and influenza.

“Because 176 [cases] in the rest of the world is very small – no reason to panic or fear. Of course, people can have concerns and they should. People could be worried – they should [be]. But that concern and worry should be supplemented with action now while we have a window of opportunity,” Ghebreyesus said. “This is what we’re saying from WHO: there is a window of opportunity because of the strong measures China is taking at the epicenter, at the source. So let’s use this opportunity to prevent further spread and to control it. Let’s not miss this window of opportunity.”