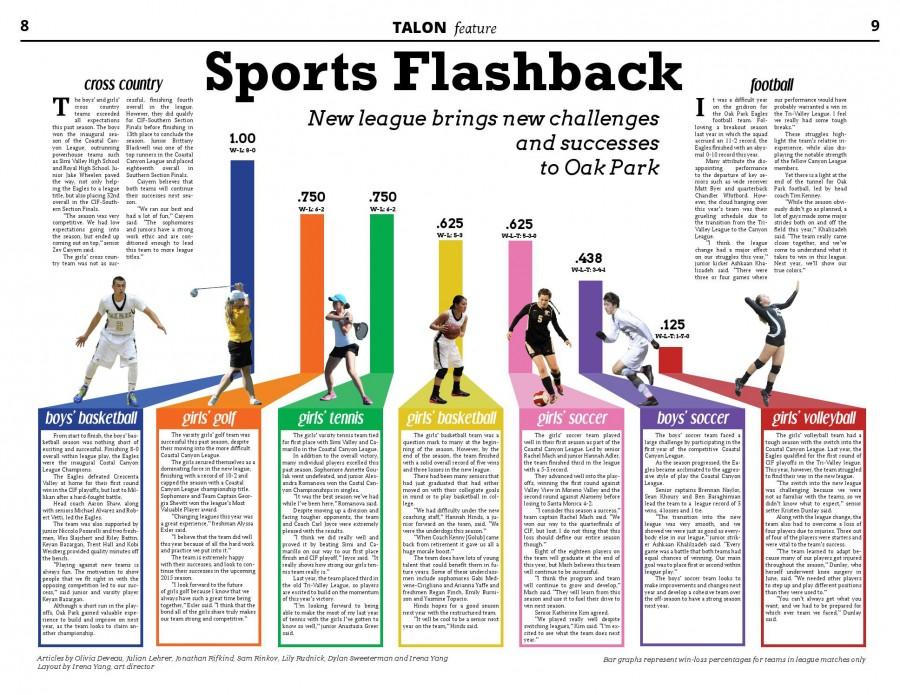 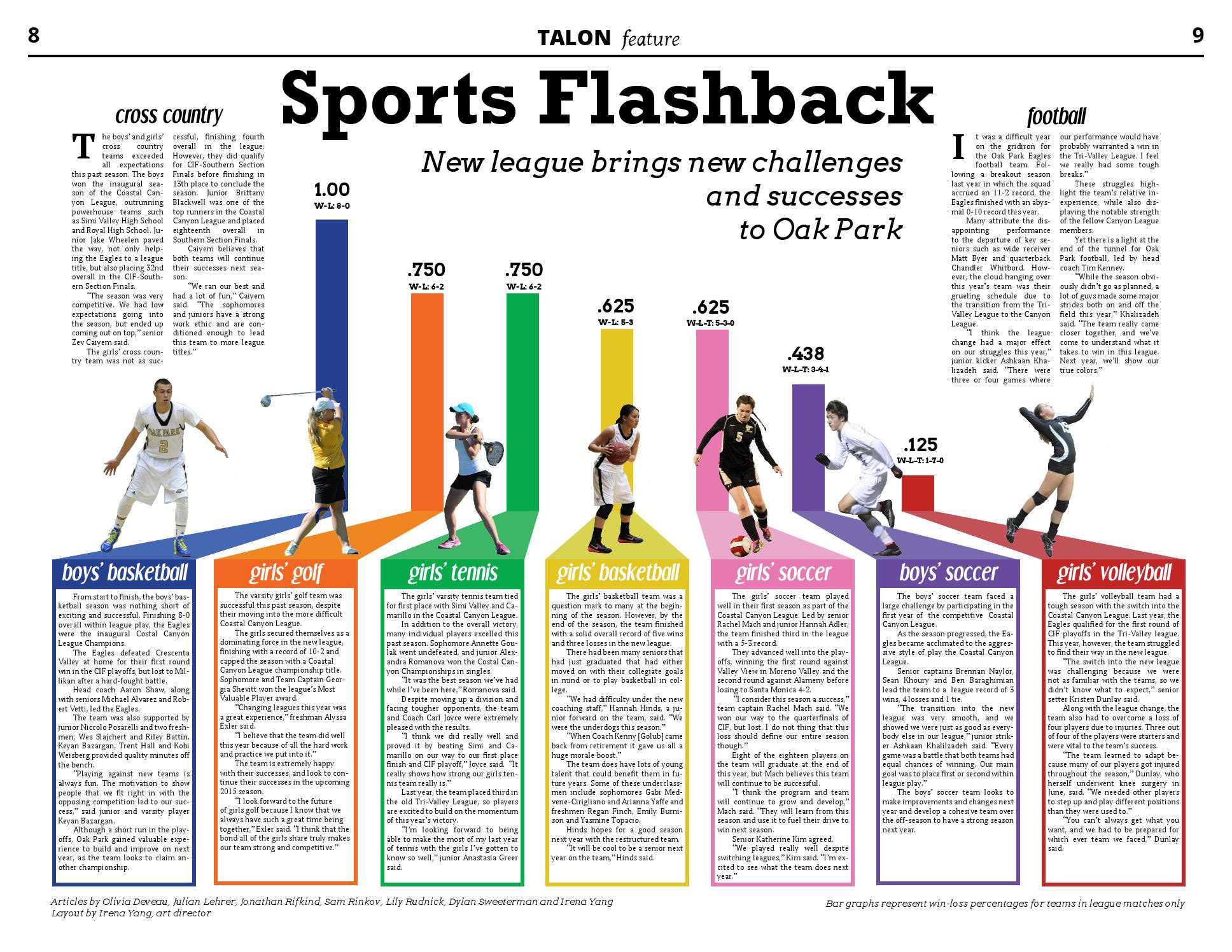 The boys’ and girls’ cross country exceeded all expectations this past season. The boys won the inaugural season of the Coastal Canyon League, outrunning powerhouse teams such as Simi Valley High School and Royal High School. Junior Jake Wheelen paved the way, not only helping the Eagles to a league title, but also placing 32 overall in the CIF-Southern Section Finals.

“The season was very competitive. We had low expectations going into the season, but ended up coming out on top,” said senior Zev Caiyem.

The girls’ cross country team was not as successful, finishing fourth overall in the league. However, they did qualify for CIF-Southern Section Finals before finishing in thirteenth place to conclude the season. Junior Brittany Blackwell was one of the top runners in the Coastal Canyon League and placed eighteenth overall in Southern Section Finals.

Caiyem believes that both teams will continue their successes next season.

“We ran our best and had a lot of fun,” Caiyem said. “The sophomores and juniors have a strong work ethic and are conditioned enough to lead this team to more league titles.”

It was a difficult year on the gridiron for the Oak Park Eagles football team. Following a breakout season last year in which the squad accrued an 11-2 record, the Eagles finished with an abysmal 0-10 record this year.

Many attribute the disappointing performance to the departure of key seniors such as wide receiver Matt Byer and quarterback Chandler Whitbord. However, the cloud hanging over this year’s team was their grueling schedule due to the transition from the Tri-Valley League to the Canyon League.

“I think the league change had a major effect on our struggles this year,” junior kicker Ashkaan Khalizadeh said. “There were three or four games where our performance would have probably warranted a win in the Tri-Valley League. I feel we really had some tough breaks.”

These struggles highlight the team’s relative inexperience, while also displaying the notable strength of the fellow Canyon League members.

Yet there is a light at the end of the tunnel for Oak Park football, led by head coach Tim Kenney.

“While the season obviously didn’t go as planned, a lot of guys made some major strides both on and off the field this year,” Khalizadeh said. “The team really came closer together, and we’ve come to understand what it takes to win in this league. Next year, we’ll show our true colors.”

From start to finish, the Oak Park Eagles boys’ basketball season was nothing short of exciting and successful. Finishing 8-0 overall within league play, the Eagles were the inaugural Costal Canyon League Champions.

The Eagles defeated Crescenta Valley at home for their first round win in the CIF playoffs, but lost to Millikan after a hard-fought battle.

“Playing against new teams is always fun. The motivation to show people that we fit right in with the opposing competition led to our success,” said junior and varsity player Keyan Bazargan.

Although a short run in the playoffs, Oak Park gained valuable experience to build and improve on next year, as the team looks to claim another championship.

The Oak Park High School varsity girls’ golf team was successful this past season, despite their moving into the more difficult Coastal Canyon League.

The girls secured themselves as a dominating force in the new league, finishing with a record of 10-2 and capped the season with a Coastal Canyon League championship title. Sophomore and Team Captain Georgia Shevitt won the league’s Most Valuable Player award.

“I believe that the team did well this year because of all the hard work and practice we put into it.”

“I look forward to the future of girls golf because I know that we always have such a great time being together,” said Exler. “I think that the bond all of the girls share truly makes our team strong and competitive.”

The girls’ varsity tennis team tied for first place with Simi Valley and Camarillo in the Coastal Canyon League.

In addition to the overall victory, many individual players excelled this past season. Sophomore Annette Goulak went undefeated, and junior Alexandra Romanova won the Costal Canyon Championships in singles.

“It was the best season we’ve had while I’ve been here,” Romanova said.

Despite moving up a division and facing tougher opponents, the team and Coach Carl Joyce were extremely pleased with the results.

“I think we did really well and proved it by beating Simi and Camarillo on our way to our first place finish and CIF playoff,” Joyce said. “It really shows how strong our girls tennis team really is.”

Last year, the team placed third in the old Tri-Valley League, so players are excited to build on the momentum of this year’s victory.

“I’m looking forward to being able to make the most of my last year of tennis with the girls I’ve gotten to know so well,” junior Anastasia Greer said.

The Oak Park girls’ basketball team was a question mark to many at the beginning of the season. However, by the end of the season, the team finished with a solid overall record of five wins and three losses in the new league.

There had been many seniors that had just graduated that had either moved on with their collegiate goals in mind or to play basketball in college.

“We had difficulty under the new coaching staff,” Hannah Hinds, a junior forward on the team, said. “We were the underdogs this season.”

“When Coach Kenny [Golub] came back from retirement it gave us all a huge morale boost.”

The team does have lots of young talent that could benefit them in future years. Some of these underclassmen include sophomores Gabi Medvene-Cirigliano and Arianna Yaffe and freshmen Regan Finch, Emily Burnison and Yasmine Topacio.

Hinds hopes for a good season next year with the restructured team.

“It will be cool to be a senior next year on the team,” Hinds said.

The Oak Park girls’ soccer team played well in their first season as part of the Coastal Canyon League. Led by senior Rachel Mach and junior Hannah Adler, the team finished third in the league with a 5-3 record.

They advanced well into the playoffs, winning the first round against Valley View in Moreno Valley and the second round against Alameny before losing to Santa Monica 4-2.

“I consider this season a success,” team captain Rachel Mach said. “We won our way to the quarterfinals of CIF, but lost. I do not thing that this loss should define our entire season though.”

Eight of the eighteen players on the team will graduate at the end of this year, but Mach believes this team will continue to be successful.

“I think the program and team will continue to grow and develop,” Mach said. “They will learn from this season and use it to fuel their drive to win next season.

“We played really well despite switching leagues,” Kim said. “I’m excited to see what the team does next year.”

The Oak Park boys’ soccer team faced a large challenge by participating in the first year of the competitive Coastal Canyon League.

As the season progressed, the Eagles became acclimated to the aggressive style of play the Coastal Canyon League.

“The transition into the new league was very smooth, and we showed we were just as good as everybody else in our league,” junior striker Ashkaan Khalilzadeh said. “Every game was a battle that both teams had equal chances of winning. Our main goal was to place first or second within league play.”

The boys’ soccer team looks to make improvements and changes next year and develop a cohesive team over the off-season to have a strong season next year.

The Oak Park girls’ volleyball team had a tough season with the switch into the Coastal Canyon League. Last year, the Eagles qualified for the first round of CIF playoffs in the Tri-Valley league. This year, however, the team struggled to find their way in the new league.

“The switch into the new league was challenging because we were not as familiar with the teams, so we didn’t know what to expect,” senior setter Kristen Dunlay said.

Along with the league change, the team also had to overcome a loss of four players due to injuries. Three out of four of the players were starters and were vital to the team’s success.

“The team learned to adapt because many of our players got injured throughout the season,” Dunlay, who herself underwent knee surgery in June, said. “We needed other players to step up and play different positions than they were used to.”

“You can’t always get what you want, and we had to be prepared for which ever team we faced,” Dunlay said.