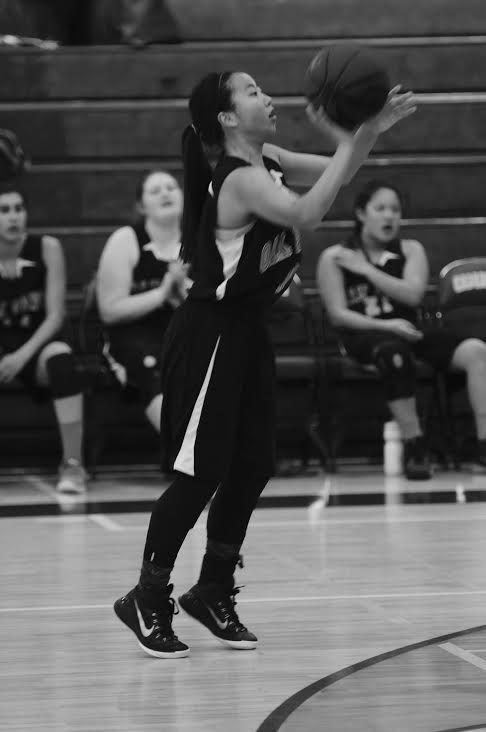 Senior Ashley Yeow shoots ball during a basketball game. The addition of a frosh-soph team will allow others to participate in the basketball program (photo courtesy of Ashley Yeow).

“The frosh girls will be to equipped to compete at the JV and eventually varsity levels,” Vickers wrote in an email to the Talon. “Frosh lays down a foundation necessary to build and fine tune skill sets and develop a street basketball IQ.”

The coaches expressed excitement at the addition of the new team.

“It adds another layer of competition to our practices and tryouts,” Park wrote to the Talon. “Especially since JV and frosh-soph [will] share gym time in the future, they [will] end up scrimmaging against one another. Each player is working hard to show what they have worked on and improved on each level.”

There has not been a frosh-soph team previously due to the limited number of girls that play basketball at Oak Park. Due to an influx of girls to the basketball program, the coaches said they felt the addition of the team would be the best choice.

“I decided to add a frosh-soph team because our numbers were higher than they have been in the past during our summer conditioning,” Park wrote. “I want everyone to get a lot of playing time and with higher numbers we had to have another team in order for everyone to get a decent amount of minutes on the court.”

Players also expressed their own enthusiasm.

“I’m really excited. I’m glad that more girls are joining the program and that we are able to build this program more,” senior and varsity player Michelle Chow said.

It’s always worth it when a group of girls show interest in a sport and we are able to foster and facilitate an environment for them to learn and realize their potential.”

The new team will also affect the pre-existing junior varsity and varsity teams.

“This team will allow the new girls to get more experience before moving up to both JV and Varsity,” junior and junior varsity player Piper Danzek said.

The addition of the team will allow for more one-on-one time with coaches.

“The girls will get more time to work with coaches in smaller groups,” Park wrote.

The coaches said the girls’ enthusiasm for the sport helps them in their coaching.

“It’s always worth it when a group of girls show interest in a sport and we are able to foster and facilitate an environment for them to learn and realize their potential,” Park wrote.

Overall, the new team’s goal is to act as a stepping stone for new girls who are interested in basketball.

“I think it will be a positive change,” Chow said. “[It] will allow us to grow as a program and share our love for basketball.”