The planned demonstration called for students to wear tube tops — which are banned per the school’s dress code — to class. According to sophomore Lauren Battin, one of the protest’s organizers, the students meant to create change in the school dress code.

“The dress code shouldn’t specifically target girls, and it should be more up to date with current fashion and style,” Battin wrote to the Talon. “I honestly think it’s insane how strict the dress code is getting. Every single day, multiple of my friends show up sometime during the day in a PE t-shirt. Walking around campus is a task for girls because they have to worry about how they look in front of yard duties.”

Everyone has shoulders and nothing is wrong with shoulders and for people pulling them down — that’s not our fault and we shouldn’t be punished for that.”

According to Principal Kevin Buchanan, administration was first informed of the protest Sept. 7 through a parent tip. After sending an email to all parents, administrators organized a lunch forum for students to voice their grievances and ask questions in the presence of the administrators.

“It was brought to my attention that a number of our students planned to violate dress code — they were going to try and do it to make a statement. And I learned of that the day before,” Buchanan said. “I thought that if they were willing to do that, it made me think that the best way to deal with that was to listen to their concerns and guide them to the most appropriate way to deal with this — which is not to be defiant — rather, it is to use the proper channels within school to address these things, like site council, or the Talon or ASB.”

The risk students were willing to take to argue the dress code convinced Buchanan to take the issue seriously.

“I [thought that] I should take this seriously, because that was quite a move on their part. They could have all gotten a mark on their disciplinary record, and potentially gotten Saturday school,” Buchanan said. “If they were prepared to risk getting into trouble to express their dissatisfaction, I should listen to them.”

If [these students] were prepared to risk getting into trouble to express their dissatisfaction, I should listen to them … We hear you, we understand — but next time, take this to Site Council.”

However, according to Buchanan, there are more recommended methods of implementing change at the school.

“[I want them] to use appropriate measures so they don’t have to risk getting in trouble to get our attention. And that was the point I wanted to make at [the forum]. We hear you, we understand — but next time, take this to Site Council.”

According to senior and ASB cabinet president Meghan Cleary, students can have a voice in ASB and the school board through Site Council.

“A protest will definitely get the attention of the administration but that alone won’t make change. We have Site Council representatives that go to meetings with Mr. Buchanan [and the school board] once a month and bring up the students’ concerns to him,” Cleary wrote to the Talon. “These meetings are places where students can be easily heard and their ideas are taken into consideration. It is organized and it is what ASB is meant for. [We have] a lot more influence on the administration than people think.” 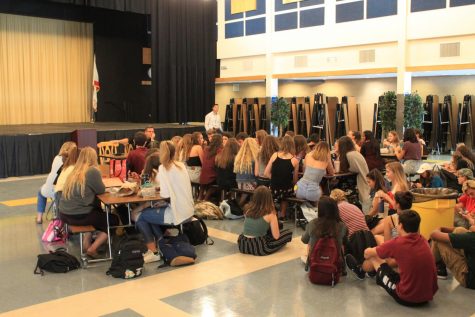 During the lunch forum, students expressed their concerns on the dress code to Buchanan directly.

“[The point I brought up in the forum] was about how I don’t understand how we’re allowed to wear a tank top with half a centimeter strap and not a tube top with no straps. The reasoning behind this was that shoulders are out and people can pull them down. Everyone has shoulders and nothing is wrong with shoulders and for people pulling them down — that’s not our fault and we shouldn’t be punished for that,” Battin wrote.

Buchanan works with campus supervisors to ensure they follow correct policies when it comes to dress coding students.

“There was a situation last week where [a student] was told, ‘No you can’t go to your car and get your shirt, you have to wear this.’ That’s not true. And I met with campus supervisors today to let them know if you have something else to wear, absolutely put in on. That’s what we want. We don’t want you to have to be wearing the scarlet letter of the PE shirt to show that you’re a Hester Prynne,” Buchanan said in the forum.

According to sophomore Bella Turner, the forum was an ethical approach to the protest.

The forum was a very nice resolution, and maybe in the future there will be a different approach.”

“I feel like a protest wasn’t completely necessary, but at the same time, people have complained many times about a lot of the issues at our school and none of them are really heard,” Turner wrote to the Talon. “The forum was a very nice resolution, and maybe in the future there will be a different approach.”

Senior Dana Shiloni compared tube tops to senior yearbook pictures in a moment that brought protesters in the forum to a verbal shock.

“You guys have eliminated tube tops in general [because] they are strapless. And I think that it’s kind of ironic how, for senior pictures, we’re forced to put on a strapless slip and if it’s allowed to be worn in the yearbook, then why shouldn’t it be worn at school?” Shiloni said in the forum.

“If we don’t have some kind of teeth in our policies, you all will do whatever you want if there’re no consequences,” Buchanan said in the forum. “You only respond to either incentives or consequences, because that’s kind of how it rolls. So there has to be some sort of consequence for violating a school policy, not just saying, ‘Oh, nevermind.’”